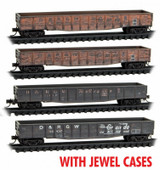 Model trains are life-like versions of real trains that we see every day in freight yards and at the passenger station. Hobbyists around the world enjoy the rich world of model trains and build detailed layouts to model these real live marvels with realistic scenery, vehicles, buildings, and much, much more!

An electric train uses a power unit that will provide power through the tracks to the train. From there, the train's engine springs to life and will start moving forward or backward! It can also change speed depending on the amount of power it recieves. Many modern trains support advanced input and control called DCC (Digital Command & Control).

O Scale (1:48) - Marklin, the German toy manufacturer who originated O scale around 1900 chose the 1/48th proportion because it was the scale they used for making doll houses. In O scale 1/4 inch equals 1 foot. Interestingly, O scale was originally called Zero Scale, because it was a step down in size from 1 scale. From the 1920s until after World War II, O scale dominated the model train market. But as model trains became more affordable for the average person, the space required to set up the tracks became a major consideration in purchasing model railroad trains.

HO Scale (1:87) - HO scale has the broadest range of products from the greatest number of manufacturers. In HO scale 3.5mm equals 1 foot. The designation HO stands for "Half O". Of course if it was actually one-half of O scale it would be 1/96th, but because HO is actually a metric based scale and O is based on English units of measure the fractions become awkward. The model railroading industry says HO is "approximately half O".

N Scale (1:160) - The "N" is short for nine millimeter (although the actual gauge is 8.97mm). In N scale 2mm is approximately 1 foot. N scale is the second most popular scale worldwide. Many modelers select N scale as an alternative to HO scale because it allows more complex layouts to be built in the space available to them. Traditional thinking is that N scale trades detail for space. However, modern manufacturing and painting processes are producing N scale models with surprising levels of detail today.

Z Scale (1:220) - Prior to 2008, Z scale was the smallest commercially available scale in model railroading. Z scale is popular with apartment dwellers and others with very limited layout space. Z scale is awkward mathematically, approximately 0.0545 inches to the foot, but that doesn't hurt its popularity. Z scale is the fastest growing scale in model railroading today. Some Z scale manufacturers offer briefcase layouts; entire track layouts with landscape, buildings, and a power supply all in a briefcase. These are high-end executive toys that sell for around $1,000.

DCC stands for Digital Command Control. Many modern locomotives come equipped with DCC and can take advantage of advanced features like controlling specific locomotives, controlling the sounds and lights and even running multiple locomotives at the same time!

Code: How high a rail track is down to a thousandth of an inch. For example: Code 70 would be 0.70 inches tall.

All-in-one track: A track that includes the roadbed and ballast.

Turnouts: Sometimes called a switch because they're the part that switches from one track to another.

Flex track: Flexible sections of track that you can lay down and bend.

Ballast: All of the rock or gravel that you see in between the rails of a track.

Crossing: Sections of track that cross a road another piece of track.

Gantlet Track: Overlapping tracks that share the same roadbed, and are used to make sure a train can pass through something narrow like a bridge, tunnel or valley.

Roadbed: The dirt buildup that is under a track to help keep it up off the ground.

Yard: An area with a lot of different ends of track where you can store and sort all your trains.

Caboose: The car, normally at the back of the train, that carries all the crew.

Classification Lights: The lights at the front of a train that tell you what kind of train it is. For example: White means it's an extra train on the tracks and green means another section of the train is still coming.

Coupler: The part that joins different trains, cars and locomotives together.

Deadhead: Normally a passenger car that is attached to a train, but is riding completely empty.

Head End Cars: Mail, baggage, and express cars that run at the front of a passenger car.

Helper: Locomotives that get added to a train set to help it get up a steep incline.

Slug: A weighted locomotive unit with traction motors to help a diesel locomotive have additional traction force during slippery conditions.

Throttle: The control unit that controls the speed and direction a train moves in.

Why Should You Choose Model Train Stuff?

Shop Model Trains for your Railroad

From locomotives to rolling stock to passenger cars and beyond, we have the model trains you’re shopping for here at Model Train Stuff. Browse our selection of freight train cars, intermodal trains, couplers & trucks as well as train sets for railroaders from beginner to advanced. We include trains of all scale models from HO scale, N Scale, O Scale, Z Scale, and more. Model Train Stuff is an online store for railroaders and modelers alike. Not sure where to get started? Read our blog for tips on elevating your model train layout, information on sales, and guides to modeling brands.